Algoma Baseball Team Among Best in State in 1937

In 2018, the Algoma 'Guins won the Shoreland League Championship - their first Shoreland League title and first championship of any kind since 1965. The city of Algoma has fielded an amateur adult baseball team since at least 1908, winning championships in the Door-Kewaunee County League, Eastern Wisconsin State League, Tri-County League, and Cherry League. However, the time they finished in second place ranks among the most impressive and memorable of Algoma baseball achievements.

By winning the 1937 Eastern Wisconsin State League championship, the Wolves (as they were called at the time) were entered into an exclusive tournament consisting of 48 other amateur baseball league champion teams from around Wisconsin. The tournament was The Milwaukee Sentinel State Amateur Baseball Tournament. It was held at Borchert Field in Milwaukee, which was the home of the American Association's minor league Milwaukee Brewers baseball team.

The tournament would pit the small town team against competition from much larger cities like Milwaukee and Kenosha. Despite their significant population disadvantage, the lads from Algoma more than held their own against their big city opponents.

Algoma native and local sports historian Dennis Sell played for the 'Guins in the early 1970's. His father, “Babe” Sell, played for the 1937 Algoma team.

“My dad had that 1937 team picture hanging upstairs...so I saw that picture from young on,” recalls Dennis when talking about his personal interest in the subject.

In 1957, Babe put both Dennis and that picture in his car and drove to the offices of the Algoma Record Herald newspaper. He thought it would be newsworthy to recount the 20th anniversary of the 1937 team. The editor of the newspaper was also in that team photo, as he had traveled with the team to the tournament as a scorekeeper. On Babe's suggestion, the newspaper wrote the article.

Dennis has used the 1957 article and another piece written in 1987 honoring the 50th anniversary of the of the team in his research. He has also read through microfilm of the Algoma Record Herald's coverage from 1937 to find recaps of the tournament games.

Algoma opened the tournament on Sunday, August 29, against the Beloit Goodalls. Clif “Lucy” Alberts was on the mound for the Wolves and struck out 13 batters. Alberts was so dominant that no Algoma outfielder contributed to an out with either a putout or an assist. Going into the sixth inning, both teams had yet to score. Babe Sell and Mert Wulf led off the inning with back-to-back singles for the Wolves. A Johnny Laurent hit would drive in Sell to give Algoma a 1-0 lead and a Lloyd Lambert triple would score both Wulf and Laurent to extend the lead to 3-0. A crowd of over 5,000 would watch Algoma shutout Beloit and win the game by a score of 6-0.

On August 30 against Ladysmith, Algoma once again demonstrated its lack of need for outfielders with another dominating performance on the mound. Les Wirkkala allowed only two hits and needed an outfielder to record just one of his outs. The Wolves' offense was on display as well, with eight of the nine Algoma batters recording hits, including five triples, in their 7-1 victory.

The players took the next day off, but were back in action on September 1. Kenosha Allen-Bradley, of the Milwaukee County Industrial League, was the opponent that day and they would be the first team of the tournament to threaten Algoma's run. The Wolves took an early lead with a run driven in by Elroy “Ratsy” Haack in the first inning. The Kenosha team would not go down without a fight, however. With Kenosha runners on base and looking to score, Algoma's Bill Marquardt caught a line drive and stepped on second base for a double play to end the game and send Algoma on with a 6-3 win. Lefty Joe Rapsck was on the mound for the Wolves and allowed five hits.

Clif Alberts would make his second start of the tournament on September 3, this time against Milwaukee Allen-Bradley. Alberts struck out 12 batters, but walked seven. Babe Sell had three hits for Algoma, including a pair of triples. Morgan Busch had two hits and drove in three runs in Algoma's 5-3 win; a win which would advance the Wolves to the championship game.

The next day, Algoma would square off against Sheboygan Bottoms Up for the tournament's title. The Wolves' defense, however, would be their downfall in the game, committing four errors. Sheboygan would score two unearned runs in the second inning, add a run in the eighth, and four more in the ninth. Algoma's offense would plate only one run in their 7-1 defeat.

Even though Algoma lost the championship game, their play and that of their Sheboygan opponents was noticed. While speaking at Sheboygan's championship banquet, Milwaukee Sentinel sports writer “Stoney” McGlyn said, “It showed the Milwaukee teams that they weren't so hot after all. Some of the Milwaukee clubs thought they had the tournament sewed up, that the other teams were just little 'country teams' and they were surprised.”

The talented Sheboygan team featured a catcher by the name of Joe Weiss who was signed by the Brooklyn Dodgers after the tournament. Not to be outdone, the Algoma Record Herald's 20th Anniversary article reported that Brooklyn also signed Algoma players Mert Wulf, Ratsy Haack, and Les Wirkkala because of their performances.

Algoma didn't just bring talented ballplayers to Milwaukee, they brought a crowd as well. Some 100 to 200 residents made the 100+ mile trek for each game. They even made a banner to support their boys on the field. 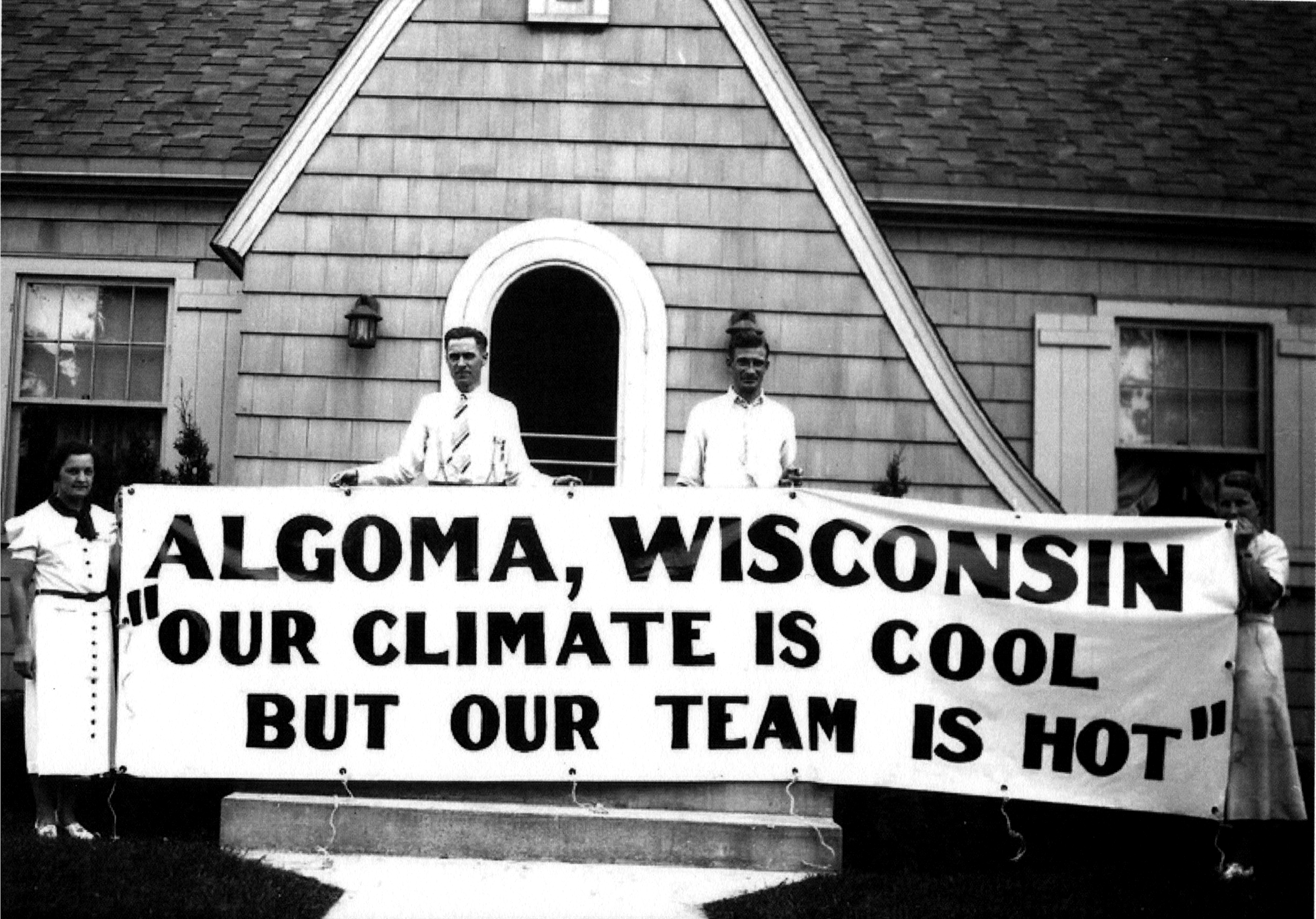 (Algoma fans proudly display the sign they brought to Milwaukee to cheer on their boys. - image courtesy Dennis Sell)

Babe Sell died in 1966 when Dennis was only 15 years old, long before he ever took an interest in his father's baseball career.

“He was a modest guy. He never talked about how good a player he was.”

However, with his research into the 1937 team, Dennis discovered his father was an excellent ballplayer. The box scores revealed many two- or three-hit games for Babe.

“It seemed he got a hit in just about every single game.”

Algoma baseball was always a connection between Dennis and Babe. Dennis remembers the 1957 season as the year he became a sports fan, attending many 'Guins games with his father. In the last 'Guins game they would watch together, Algoma won the 1965 Cherry League championship. Dennis was in the stands in 2018 to watch Algoma win the Shoreland title and couldn't help but think of his father.

“I just wish I'd have sat down with my dad with a microphone and a tape recorder and had him verbally give me his memories of that 1937 team.”

Babe and the rest of the members of the 1937 Algoma Wolves team may have passed on but the memory of those men and their accomplishments on the field are being kept alive; especially the time they went to Milwaukee to take on the big boys. 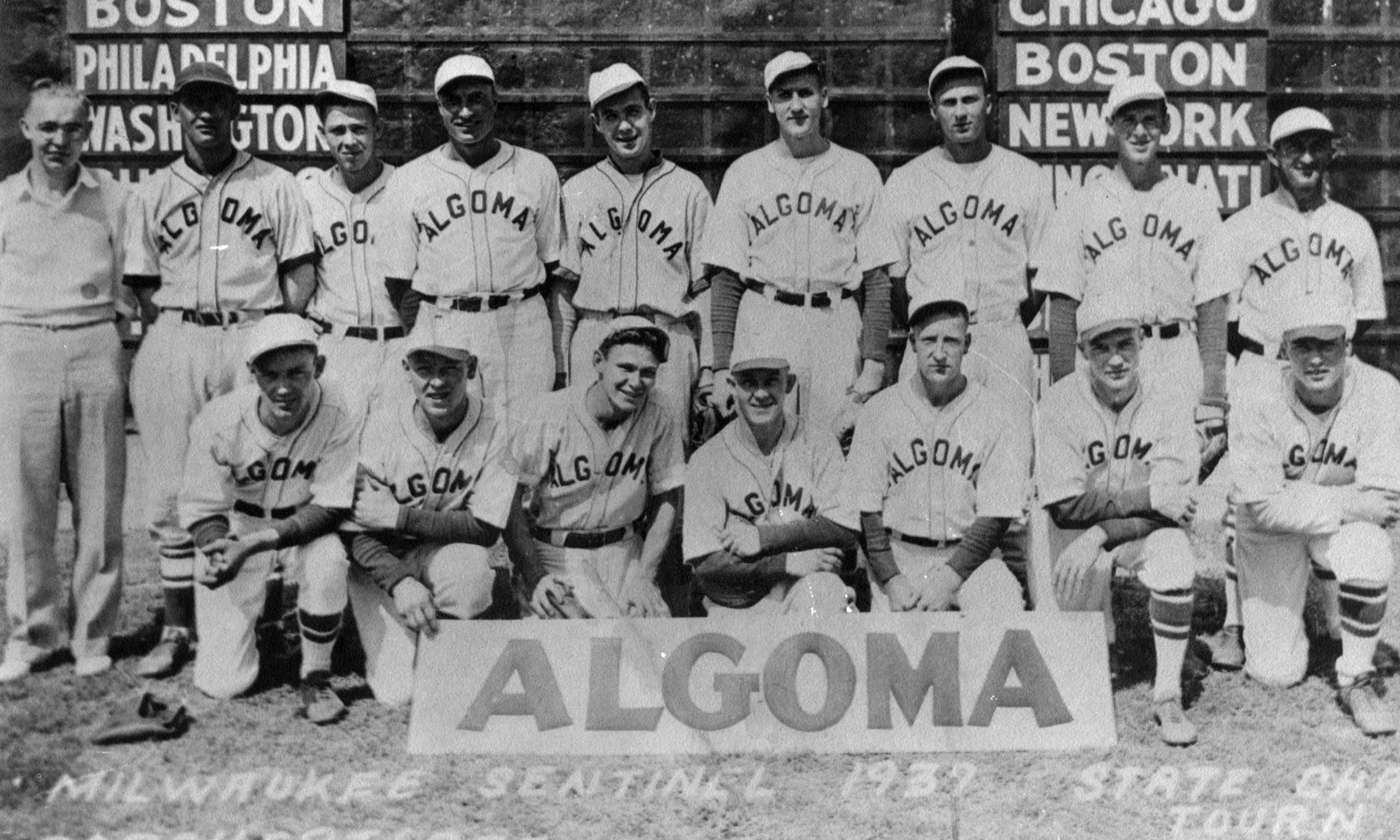