History of the Denmark Devilbears

In 1994, the Village of Denmark proposed acquiring a seven-acre piece of land for development. Once acquired, the Village and the Denmark School District worked together to build a baseball field on this parcel. Through fundraisers and funding from the Village, along with help from countless volunteers, Highridge Park was born.

One person in particular took notice of the newly built baseball field.

“It was a beautiful diamond...it would be a shame not to have an adult team play on that field and represent the Denmark/Maribel area.”

Kevin Konkol grew up in Maribel, just a short trip down Interstate 43 from Denmark, and had recently started working in the Village. After playing youth baseball in Maribel, he joined the Branch Blaze amateur team in 1985 and played with them in the Shoreland Baseball League until 1993. Due to his familiarity with the league, he thought he would put together a team to join the league and play on the new field. 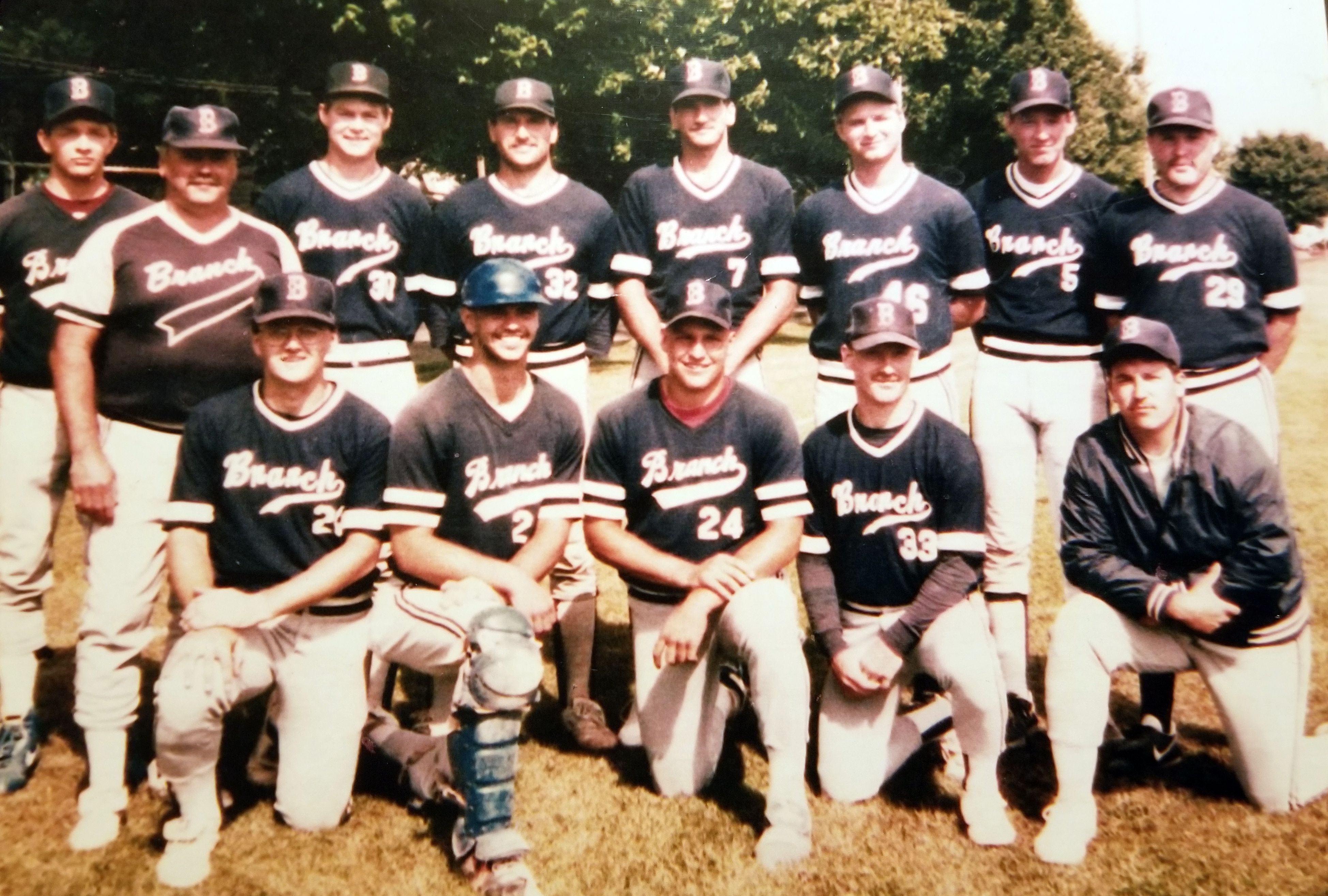 In the summer of 1998, Kevin reached out to some players who had finished their high school and American Legion baseball careers to see if they would be interested in continuing to play baseball. He was able to get together ten players to field a team for a scrimmage against the Shoreland's Kewaunee Chiefs.

Knowing he was short on pitching, Kevin asked his former Branch teammate, Gary Bolle, to throw some innings for him. Kevin and his makeshift team topped Kewaunee by a score of 7-5. 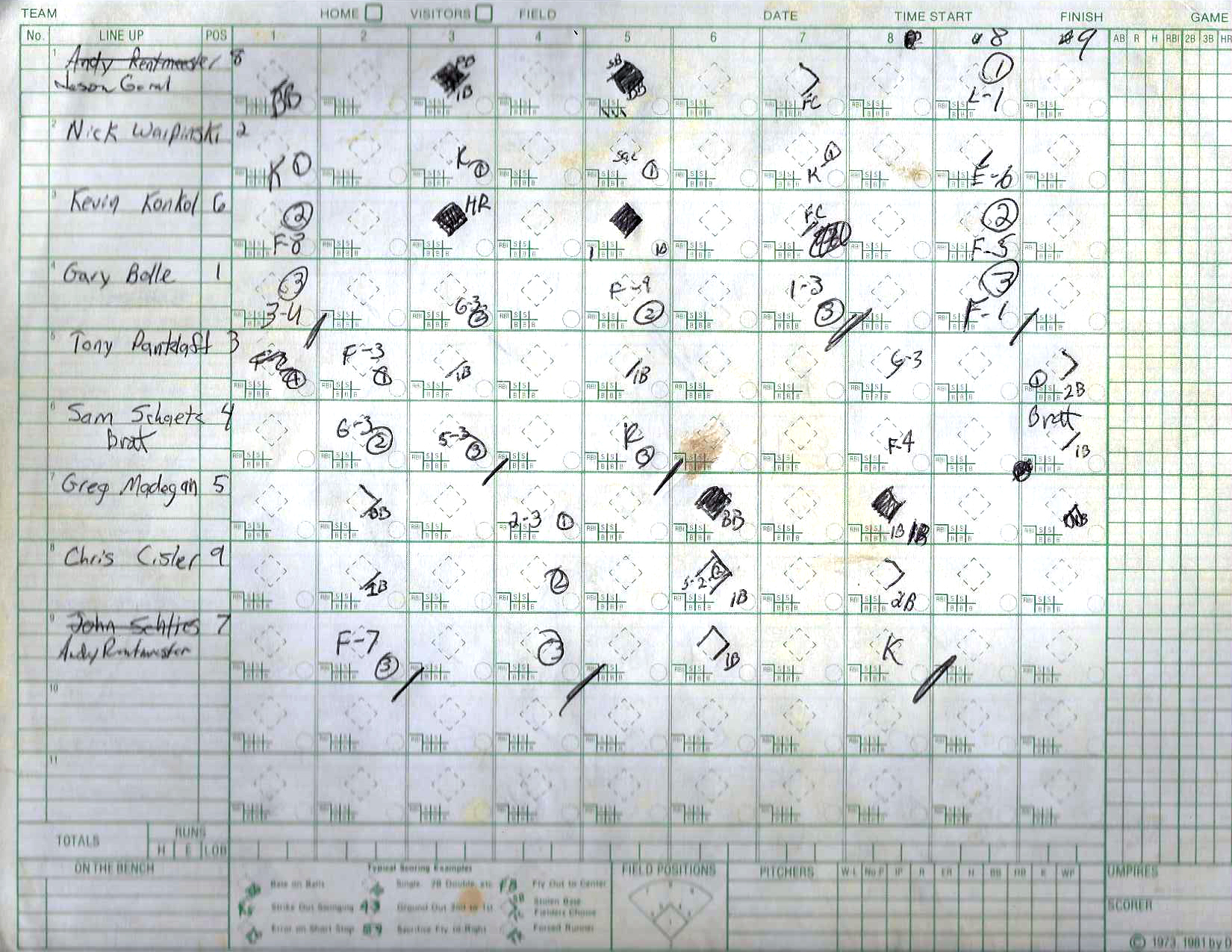 Over the winter, the group set out to raise the funds necessary to play a full season. Through some fundraisers, and with financial support from Denmark State Bank and the Circle Tap bar, the team had secured enough money to buy uniforms and join the league. At the Shoreland League's annual meeting in February of 1999, Denmark was accepted into the league.

Kevin met with a few of the players to try and come up with a nickname for the team, but they were short on ideas. However, inspiration would strike.

“I either saw this on the History Channel or I dreamt it,” Kevin chuckles. “The name 'devilbear' came up and it was kind of a [Native American] nickname for the wolverine...I thought, you know what, I'm gonna go with that.” 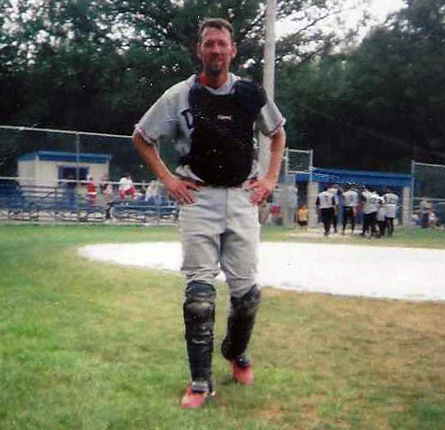 The Denmark Devilbears were now funded, named, and a part of the league, but there would still be a few obstacles to overcome.

The Highridge baseball field was new but it lacked lights for night games, unlike the other fields in the Shoreland League at the time, so all home games had to be played on Saturdays and Sundays. However, playing without lights was not a new situation for Kevin, so he didn't expect it to be a problem.

“Since I played for Branch all those years with no lights, I thought that this would be easy to overcome but little did I know that I was wrong.”

Because of the weekend afternoon game times, crowds were small and little-to-no revenue was coming from the concession stand. The players went around town to local businesses looking for donations. Kevin's parents also chipped in.

“They were always there for me and my dad would secretly help me out with some extra startup money for the season. He'd write me out a check for about $300 every year for the Devilbears...I never expected it but that helped.”

Also making it hard to find baseball players was the fact that fastpitch softball was the more popular sport in the area. At the time, Denmark sported two of the top-20 fastpitch teams in the world and had 18U and 23U teams that were competing in world tournaments. Spending a weekend traveling to different states to play in fastpitch tournaments was proving to be more appealing to potential players than playing baseball.

Despite those hurdles, Kevin and the Devilbears plowed ahead and took the field for the 1999 season. 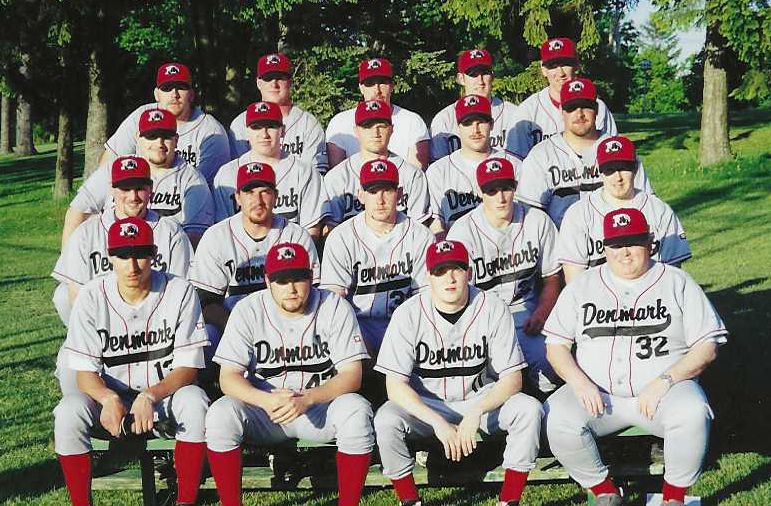 “The Shoreland League was rough on us,” Konkol remembers.

Through five seasons, only once were the Devilbears in contention for a playoff spot at the end the year. And in that year, consecutive losses to end the season kept them out of the postseason.

Denmark requested a leave of absence from the league in 2005 citing a lack of funds and players. Kevin knew there was a talented group of Denmark High School players coming along and had hoped to hold things together until they were able to play. He even had someone ready to take over the team, but it fell through.

In 2006, the Denmark High School baseball team finished runner-up at the State championship. Several seniors from that team rekindled interest in the Devilbears.

“Ben Jaeger and I needed a place to play ball in the summer during college,” recalls Shane Michiels, “We thought of the Devilbears and decided to reach out to Kevin.”

With Kevin's help, Shane and Ben, along with other members from their Denmark High School team, began to put the Devilbears back together. Kevin taught them how to schedule games and umpires, obtain a beer license, run the concession stand, and he attended a few league meetings with them. He even showed them how to turn on the lights that had now been installed at Highridge Park.

“Kevin was more than willing to give to the team up to Shane for a new direction...[he] allowed us to keep the name and even offered some jerseys,” Ryan Steffel said about Konkol's role in the team's rebirth. Steffel, who had played one season with the original Devilbears, also came on board to lead the new team and would eventually become their on-field manager.

Steffel would not be the only individual from the original Devilbears to run a Shoreland League team. From that group, Chris Cisler managed the Two Rivers Polar Bears and Manitowoc Bandits to multiple league championships, and Andy Froehlich would be a founding member of the Manitowoc Heat.

In 2007, Denmark was readmitted back into the Shoreland League. Denmark's second go-round in the league led to immediate success. They won the league title in their first year back and then proceeded to win the next four years, as well - also claiming championships in 2014 and 2016.

During his first stint with the Devilbears, Kevin got to be teammates with his brother, Bob, who is nine years his younger. They were given the nickname “Smash Brothers” by amateur baseball enthusiast Jack Sprecher. Getting to play with his brother was a treat that Kevin will cherish. 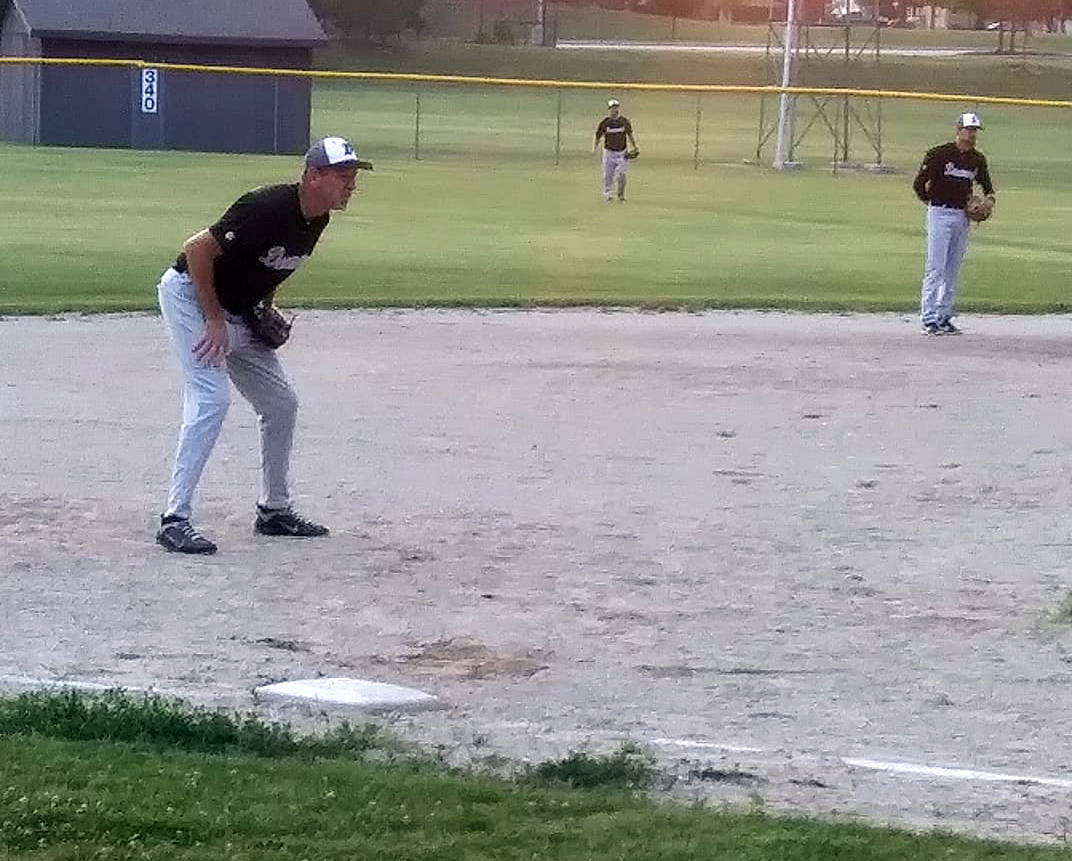 Kevin returned to the field as a part-time player in 2014.

“This was really scary for me; I knew that I still could play but didn’t want to make a fool out of myself. I wasn’t sure how the team was going to react, either, [but] they were great, very welcoming; but most still weren’t on board until they actually saw what I could do. Pretty soon I found myself batting fourth in the lineup wondering what just happened. Just feeling like part of the team was all I could ever ask for.”

For his efforts to bring adult baseball to Denmark, and to keep it going, as well as his accomplishments on the field during a career that spanned across four decades (and perhaps more to come), Kevin was elected to the Shoreland League Hall of Fame in 2019. 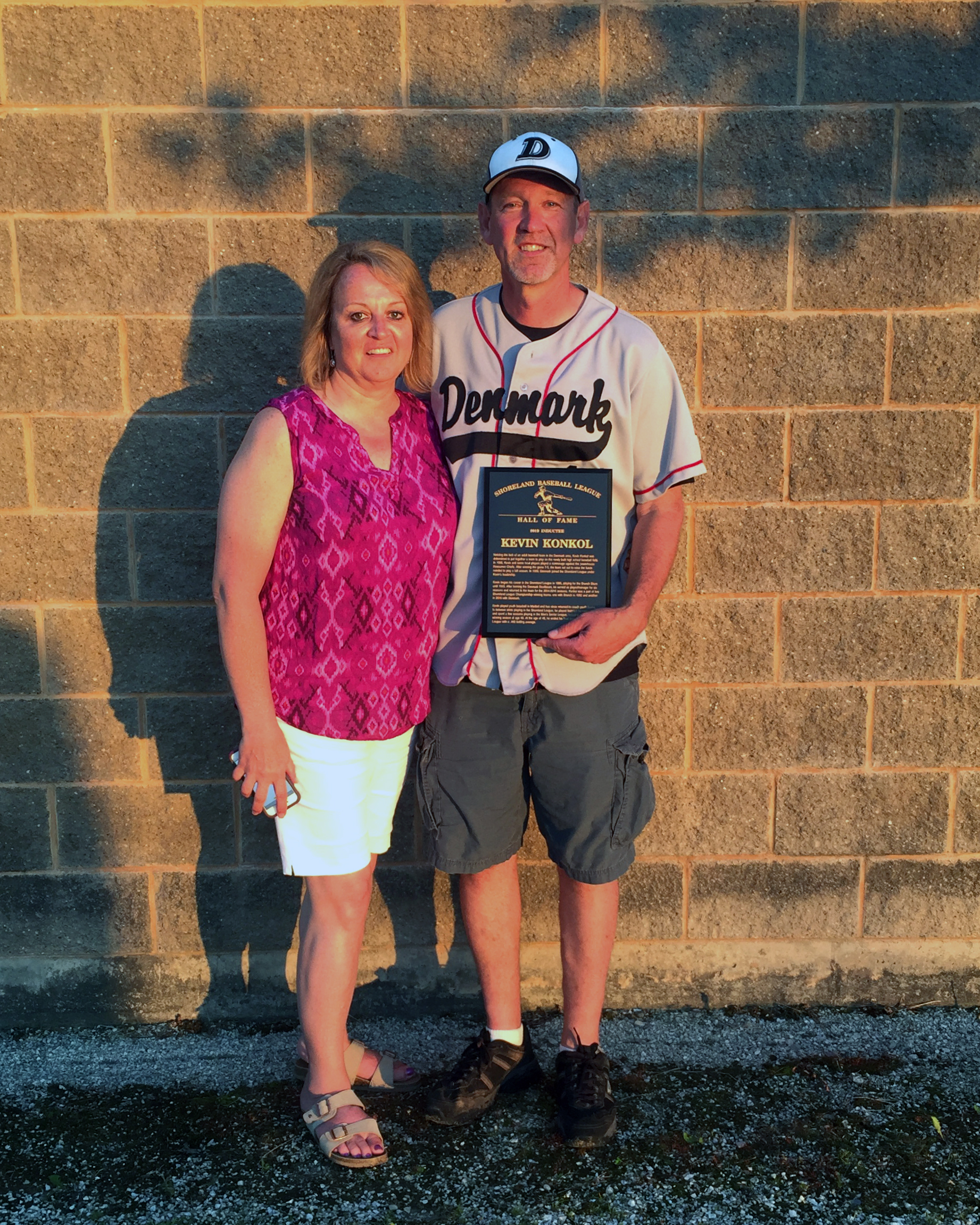 In 2020, the Devilbears will play their 14th season since being brought back to life and 19th season overall. The “beautiful diamond” that Kevin saw has been the Devilbears home for all of those seasons and has hosted League Championship games and even an All-Star game. Without Kevin's vision and leadership in 1998 and willingness to help usher in a new generation of Devilbears in 2006, baseball may have remained only a kid's game at Highridge Park.